Practice:
1. Peel orange sweet potatoes, yellow sweet potatoes, and taro, dice, and soak in water until use.
2. Boil a pot of boiling water, pour in the sago rice, cook until there is a little white spot in the center, take it out, and soak in a bowl of cold water for later use.
3. After mixing cassava flour and granulated sugar with a little water, pour in boiling boiling water, add a suitable amount of cassava flour while stirring with a spoon, and knead until it becomes a ball. 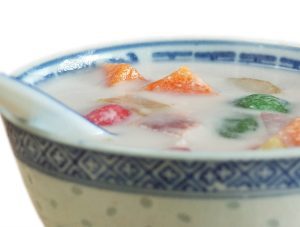 4. Boil a pot of boiling water, add the dough that has been kneaded into small pieces, cook until the potato flour balls rise, then remove it and soak it in cold water for later use.
5. Add pandan leaves to a pot of water, cook until boiling, add sugar and salt to taste.
6. Add sweet potatoes and taro to syrup and cook for about 15 minutes.
7. Remove pandan leaves and discard them.
8. Drain the sand glutinous rice and potato flour balls, add the sugar water with coconut milk, and cook until boiling.